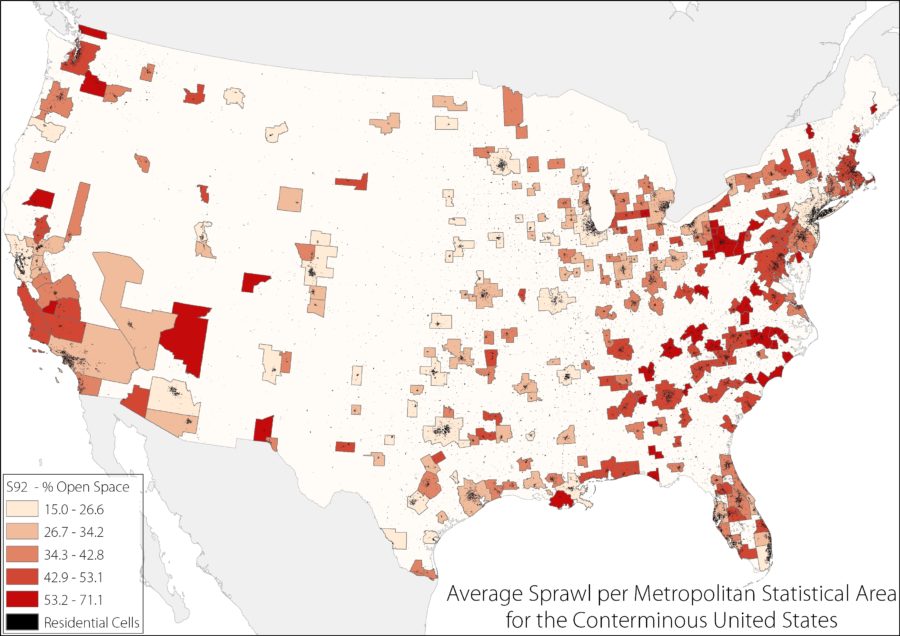 Portraying Urban Sprawl from Space: an update and geographical effects

On March 10th (NEW DATE), our fifth Quadtrees Hub will take place. The aim is to share and discuss research in progress. Quadtrees’hubs are open to anyone interested and somehow familiar with some quantitative techniques and willing to progress with these. Please contact Isabelle Pigeron-Piroth for information.

We test the robustness to change in geographical grids and extents of the urban sprawl measure implemented a decade ago by Burchfield et al (2006) on the conterminous United States. They calculate urban sprawl as the percentage of open space surrounding residential cells using a fixed 1km2 grid.  They then used this index to determine which factors positively contribute to the development of sprawl.

Instead of a fixed grid, we use a moving 1km2 window, centered on each cell, which is more in line with standard GIS and landscape metrics applications and with the sprawl concept suggested. We also change the areal extent used within each metropolitan area for the calculation based on the development of residential cells in the period between 1976 and 1992.  This is to determine whether changing the definition of the urban fringe will affect the outcome of the sprawl index values.  Mostly recently, we calculated an updated measure of sprawl using data from 2016, to compare with that from 1992.  Through these methods, we analyze how our more spatially accurate calculations affect the sprawl index values, and hence, the understanding of the factors that contribute to sprawl.